If I were to describe THE FEARSCAPE to my friends, I’d say it was mindblowing. Every twist and turn leads us down a path that we didn’t realize we were on. I guess that makes us more similar to Henry Henry than we’d like to admit. THE FEARSCAPE #5 by Ryan O’Sullivan, Andrea Mutti, Vladimir Popov, and Andworld Designs lets us see a little bit about Henry we didn’t realize we needed to know. And, although I empathize with Henry, it’s still hard to feel bad for him. And I think that’s more a reflection on me rather than on him.

We catch Henry in a spot where murder and sabotage seem to be his only answer. But Jill and the Hero with a Thousand Faces come up with a plan that may save the Fearscape. 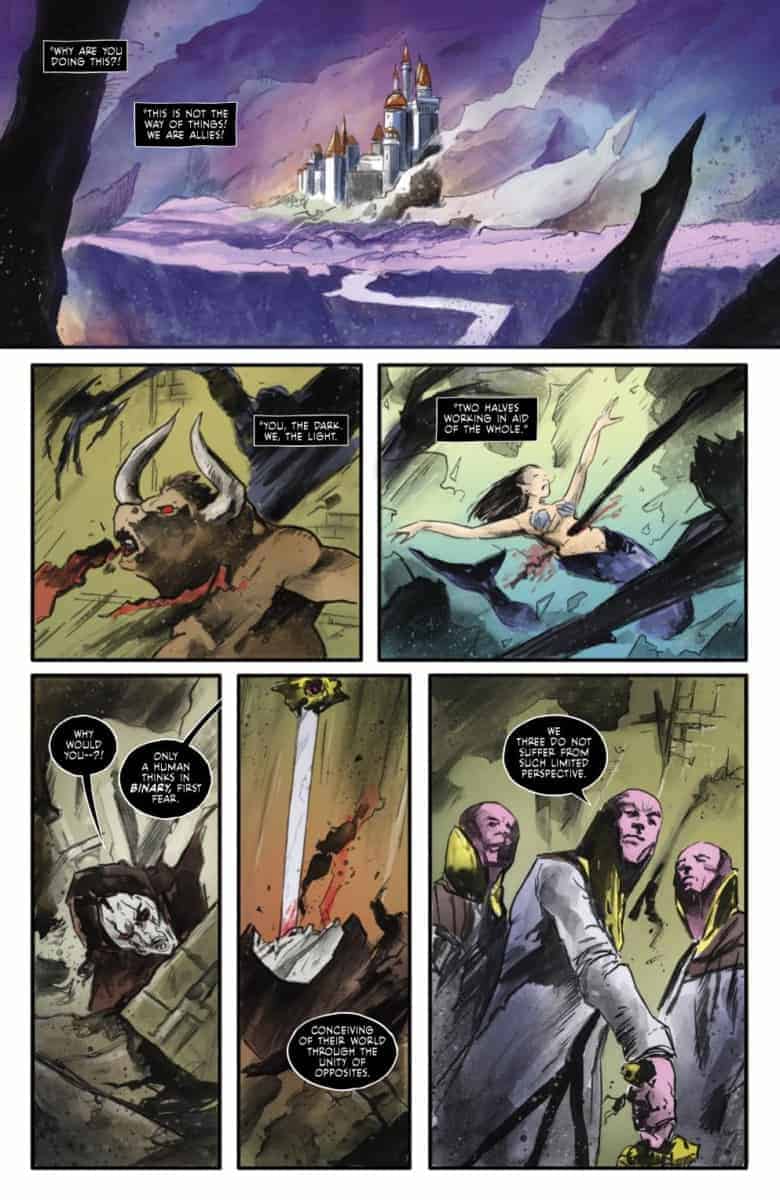 When we last left Henry, he’s holding a knife to the infant Muse. He is interrupted by Jill before the deed is done. However, Henry is running on adrenaline and overreacts to Jill’s presence. Before turning the letter opener onto her, Arthur Proctor walks in. They have a small scuffle before Henry injures Arthur then runs off.

Jill is in a panic to help her father. Arthur, however, has another plan. He doesn’t want Jill to worry about him. Instead, he shares a secret with Jill. A secret that involves Henry, and boy, is it a doozy. This secret slightly alters how we see Henry and his actions towards Arthur. It doesn’t justify Henry’s actions, but it does give us a little background and understanding in how Henry thinks. Jill leaves Arthur, holding the muse and crying. She’s off to find the Hero with a Thousand Faces. They pair need a plan to stop Henry from destroying the Fearscape.

Henry, injured from his fight and mentally lost, wanders the streets until he runs into the Tygers. But we know the Tygers are really the Triplets from the Fearscape at this point. The Triplets need Henry to take them to the grave of the poets. Although Henry insists that he already has, they demand he takes them somewhere specific within the Fearscape. It was something I didn’t imagine was present there, but apparently existed. 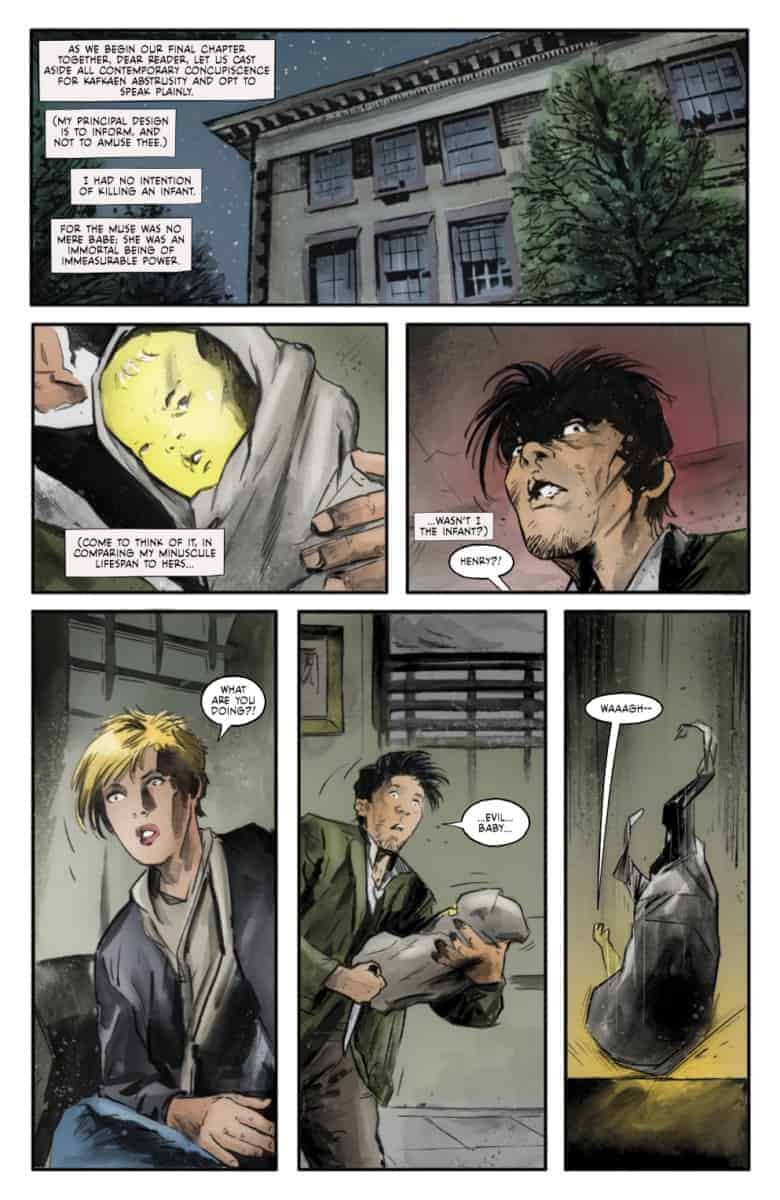 At this point, the characters are becoming fully fleshed-out beings. We (sort of) know Henry and have a strong idea of who Jill and Arthur are and how they think. O’Sullivan does a fantastic job of showing rather than telling who each character is.

Henry is still the character that catches the most attention. Although highly unpleasant, Henry is constantly capturing the panel’s attention. While a wounded Henry wanders the streets, he runs into the Tygers. However, he seems shocked when he realizes the Tygers were really the Triplets, something we always knew. But the section of panels that follow are the most telling. He follows this up by showing us how the Tygers became the Triplets. However, the whole time we’re seeing this, Henry states, “There is no need to recap events you have already witnessed. To think of it! The sheer audacity of recalling prior scenes by means of Montage!” We then see the scene…. as a montage…

This shows so much about who Henry is. Although he didn’t know the Tygers were really the Triplets, he plays it off as if he knew the whole time. Henry’s arrogance is so strong that, when we get to the end and see what Henry is hiding, I’m not totally sure he’s redeemed himself. And I don’t think he’s supposed to, which is the beauty of THE FEARSCAPE. 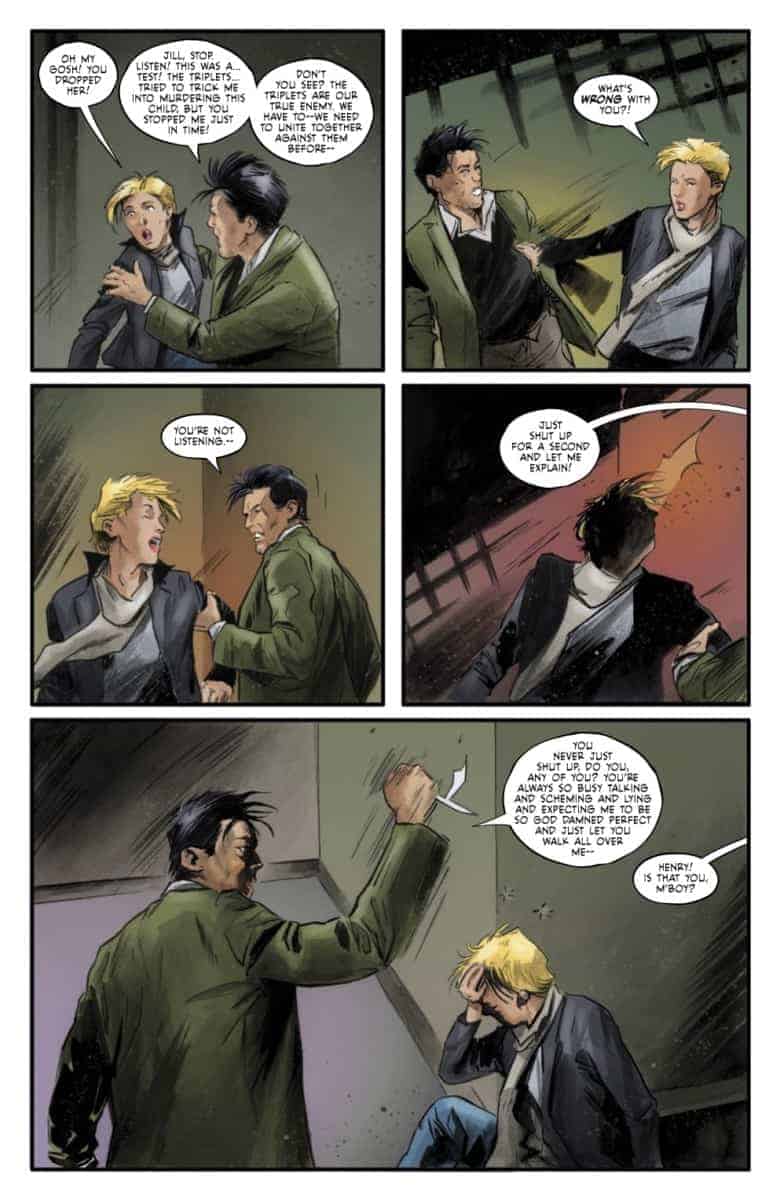 Andrea Mutti and Vladimir Popov never let up on the story. Their art is always perfectly paced with the story, giving us action and creating anxiety whenever necessary. These two are mind-blowingly talented and, together, it’s like a powerhouse for fantasy.

This issue is not only action heavy, it’s emotion heavy. The characters are put through the wringer as far as problems they have to tackle. Mutti does a fantastic job capturing these moments. When Arthur whispers Henry’s secret to Jill, her face is rightly astounded. Normally, moments like this can be seen as being sort of cliché. But with how Mutti does it, it’s captivating. Half of Jill’s face is in shadow and the angle is a little odd. This gives us the same anxiety and shock that Jill has (once we learn the secret, that is).

Mutti’s art is perfectly paced with Popov’s coloring. When Henry and Jill are talking, the scenes are depicted in cool tones. However, as the tension between the two starts to build, warmer colors start to seep into the panels. This slow but effective shift raises our own anxiety about the situation, emphasizing the desperation of the moment. It’s absolutely wonderful.

All this wonderful art and story is emphasized with Andworld Design’s lettering. The placement of the word bubbles is perfect for the story.

Overall Thoughts on THE FEARSCAPE #5

THE FEARSCAPE #5 has done something that a lot of comics don’t manage to do: it forced me to reflect. After reading this issue twice, I had to sit down and really think about how I felt. Do I still hate Henry? Do things that happened to Henry justify his actions? It’s actually been a little tough for me to think and reflect on how I feel about Henry.

However, one thing I do know is that I love the hell out of THE FEARSCAPE. Ryan O’Sullivan, Andrea Mutti, Vladimir Popov, and Andworld Designs give us a story that forces us to look at how we see the world. Are we dicks like Henry? And if so, was there something that made us this way? Can we learn to express our own issues before they drive us insane? There probably isn’t a straight forward answer. But THE FEARSCAPE may make you rethink some of your own actions.