MY HERO ACADEMIA Season 4 is just a couple of months away, but we’re already getting exciting visuals. They come ahead of the anticipated release date on October 12th in Japan. Season 3 had an explosive finish about this time in September of 2018, and fans have been itching for more. YTV, the series’ main broadcast station in Japan, posted some amazing visuals for the next season to give fans a little taste while they wait. And, given how much action we saw at the end of Season 3, this was a much-needed tease.

For those who aren’t aware, MY HERO ACADEMIA is one of the best shonen to come forward in years. For shonen, or anime marketed toward young men, action is generally the primary element of the show. MY HERO ACADEMIA combines that incredible action with a strong plot and stronger characters. That’s where the series shines; rather than just being a series with flashy fights and amazing punches, it has characters you can get behind. If you’ve yet to watch through the past few seasons, I would strongly recommend doing so. The series is incredible, and Season 4 is one of the most exciting arcs across the entire series.

A True Look at a New Season!

Visuals are a common thing for series like this, and typically show off some exciting new characters and themes from the show. In this case, we get a look at our favorite heroes from Class 1-A of UA Academy. Additionally, the new upperclassmen we got to know toward the end of the previous season are front and center with the main cast. Check out the exciting visual below: 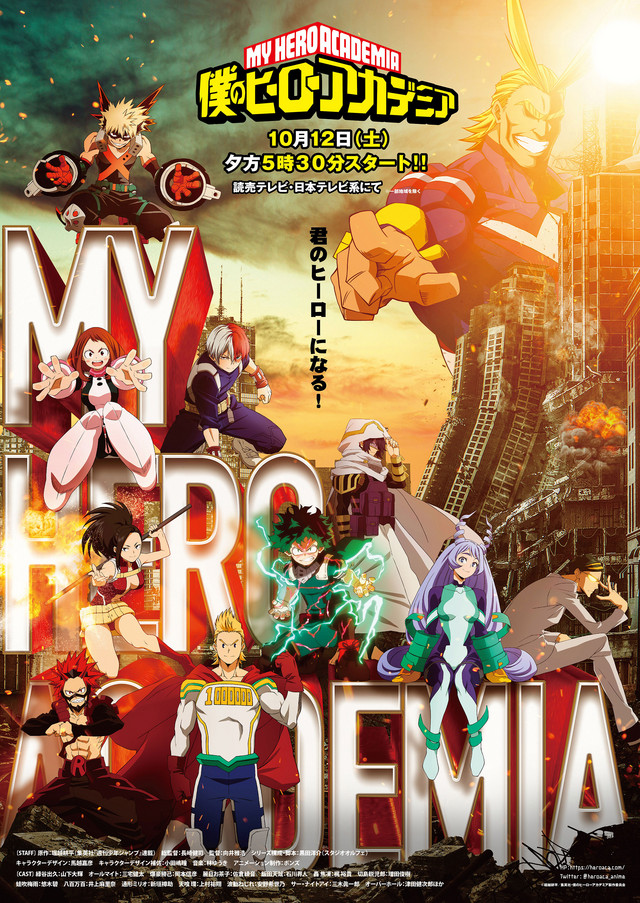 The new visual ahead of MY HERO ACADEMIA’s Season 4 Release | Image: YTV

In the background of the image, we can see a ruined metropolitan area and all of our heroes in their full gear. Protagonist Midoriya Izuku is wearing his updated equipment for use with his new and improved “Shoot Style” and the upperclassmen are in their outfits as well. Given the tenor of the season’s end, the revelation of a new primary antagonist, and the makeup of characters on the image, we’re likely to see a lot more combat this season. The show is progressing toward more and more serious encounters. To that point, our high school heroes-in-training are getting more and more permissions to engage in real combat. That likely means that we’ll see them make use of their higher status as they get closer to becoming truly professional heroes.

Get Excited for New MY HERO ACADEMIA!

We’re likely to get even more exciting news ahead of the series’ release come October. Having a large, looming All Might over the new heroes smacks of looking forward to a new generation. It’s finally time for the young to replace the old and for new eras to begin. Last season, All Might extinguished the last of his powers fighting against All For One. Now, Midoriya is going to have to establish himself as the new holder of One for All. And for the world, there needs to be a new symbol of peace. All of this is up in the air and fans should be incredibly excited to figure out how it all turns out. If you want more to be hype about, you can also check out the season’s trailer here.

What’s your biggest hope for season 4? Leave us your (hopefully spoiler-free!) thoughts in the comments! If you want more to be hype about, you can also check out the season’s trailer here.