In a post-war fantasy landscape, veteran and all-around badass Jenner Faulds has made a name for herself as the Feld’s only female private investigator. Fans of FABLES and other fantasy-crime hybrids will love Brian Schirmer’s latest series from Image Comics, FAIRLADY. Schirmer’s quick, punchy dialog perfectly suits the crime-noir plot. Artist Claudia Balboni adds the fantasy flare, making FAIRLADY a unique and exciting series. Just because it’s part fantasy doesn’t mean Schirmer shies away from challenging topics. Indeed, the series takes a look at issues from violence to sexism.

ComicsVerse is excited to talk to Schirmer about his work, comics as a tool for representation, and how he came up with the idea for FAIRLADY.

[Editor’s note: portions of this interview have been lightly edited for clarity]. 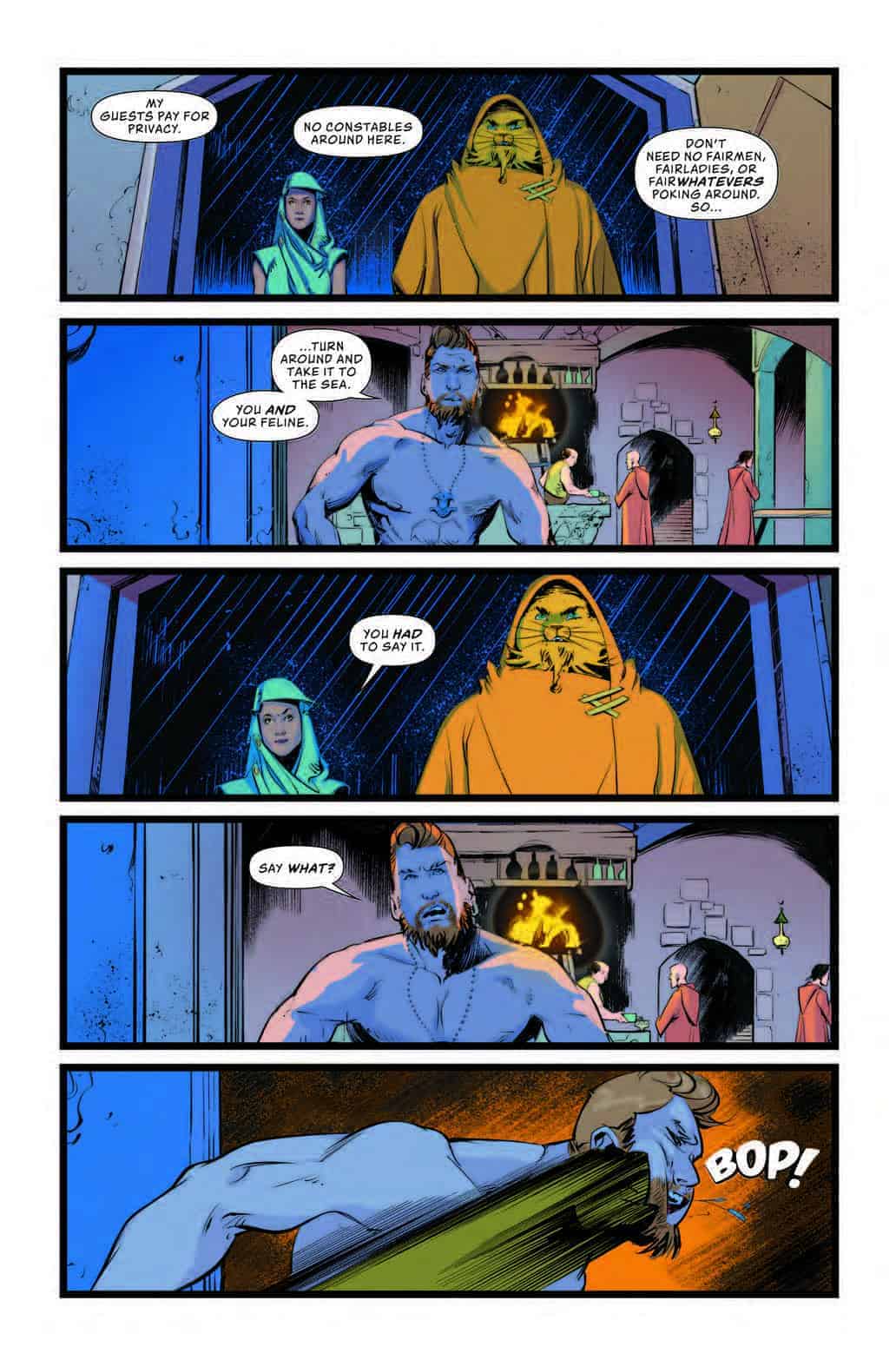 ComicsVerse (CV): Thank you for taking the time to talk to us about your new work from Image Comics, FAIRLADY. To start things off, can you tell our readers a little about the series?

BRIAN SCHIRMER (BS): I originally pitched the series as “a gender-swapped MAGNUM PI in a post-War-of-the-Ring world.” Each issue tells a standalone story over 30-pages, and follows Jenner Faulds, the lone female private investigator. It’s set in a fantasy realm, complete with magic, dragons, giants, and the like. However, our stories focus more on street-level investigations, rather than epic quests. Most of the action takes place in and around The Feld, a city built out of the husk of a massive mecha, a casualty of a long-forgotten conflict.

CV: The title — FAIRLADY — suggests a trope of the weak/mild woman who needs saving. However, your “Fairlady,” Jenner Faulds, is a striking protagonist. Indeed, she’s the only “fairlady” — female veteran and private investigator — around. What drew you to focus on such a powerful female lead?

BS: I’d never seen or read a story about a female private investigator in a high fantasy setting. When I realized that, I immediately knew I needed it to exist. Then I realized it was up to me to partner with super-talented artists to make it a reality. With Claudia Balboni on illustrations and Marissa Louise handling the colors, I couldn’t have asked for a better team.

CV: When women authors create powerful female leads, they’re often criticized for having an overly feminist agenda. I happen to like a good feminist agenda. Does FAIRLADY fall into that category of comic? Was that important to you, or is it just a side effect of a great protagonist?

BS: I certainly consider myself a feminist, and I like to think that belief and ideology is just ingrained in my writing. If that makes FAIRLADY a feminist comic, then who am I to argue? It wasn’t my outright objective, but then it is a series centered on a woman who breaks arbitrary rules — established by men, of course — by simply doing her job. 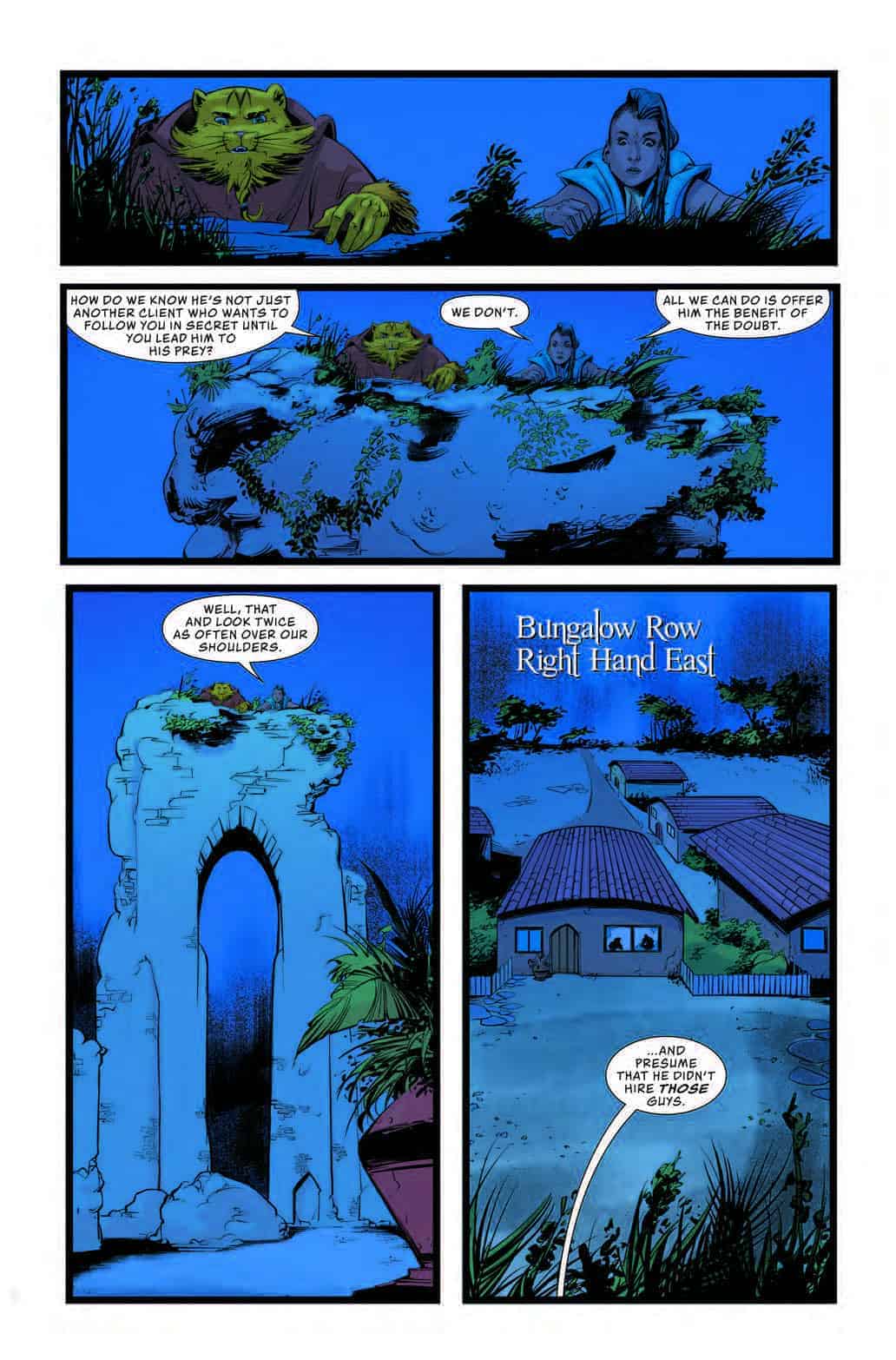 CV: You seem at home with genre bending. Your previous series from Image Comics, BLACK JACK KETCHUM, blended fantasy and western genres. FAIRLADY takes place in a sci-fi/fantasy universe. In some respects it’s reminiscent of the series FABLES. But at its core, it’s a crime noir series about a pair of rugged private investigators. Can you elaborate on what made you want to take a fairy tale twist on a crime story?

BS: Again, it was something I’d never seen — an episodic detective series in a fantasy setting with a female lead. It seemed like a great story engine that would allow for a variety of cases, tones, and structures. Some issues are rather dark, while others lean more towards humorous. Some are quite linear, some jump around in time.

CV: FAIRLADY may seem like fairy tale on its surface. But it addresses some pretty deep topics like post-traumatic stress, death, and misogyny. What role do comics play in helping us as creators and readers explore hard topics? Do you think FAIRLADY helps readers navigate these (and other) topics?

BS: Well, that would be rather presumptive of me! Heh. I’m just looking to write the best story I can. If any reader sees themself or their concerns reflected in something I’ve written, I hope it’s a positive experience. If that helps them in even a small way, that’s a shimmering bonus for me. Comics in general have a long history of addressing and exploring, as you say, hard topics. MAUS. GREEN LANTERN/GREEN ARROW #85. The majority of the X-MEN titles. BITCH PLANET, of course. BLACK.

Western comics are a great venue for tackling a wide variety of issues, both because of the versatility of the medium and because there’s not as much money on the line, relative to, say, film and television. From that latter perspective, comics are on the front line of open and frank discussion on any number of topics. Maybe that’s their ultimate strength.

CV: Claudia Balboni’s artwork in FAIRLADY perfectly suits the crime-drama-meets-fairy-tale story. How was it to work with Balboni on the series?

BS: Well, as you say, Claudia and I had worked together previous on BLACK JACK KETCHUM, our weird, existential Western over at Image. When it was clear that FAIRLADY was going to move forward, I reached out to her, and her schedule was about to clear up. We’d wanted to work together again, and this just seemed a natural. Looking back, I can see KETCHUM as a warm up. We know each other better now. I know how to write for Claudia. That’s part of the challenge of writing comics — tailoring your scripts to the needs of each specific artist, doing your best to write to their strengths.

Most importantly, I trust Claudia. I trust her choices. As such, the vast majority of the designs in FAIRLADY are pure Claudia. And just like my experience on KETCHUM, her work elevates everything I write. I’ll have an image of something in my head, and I’ll put that in the script. Then, she winds up giving me something that’s so much better, so much more on point with the story, or the character, or the beat. She’s just a joy. 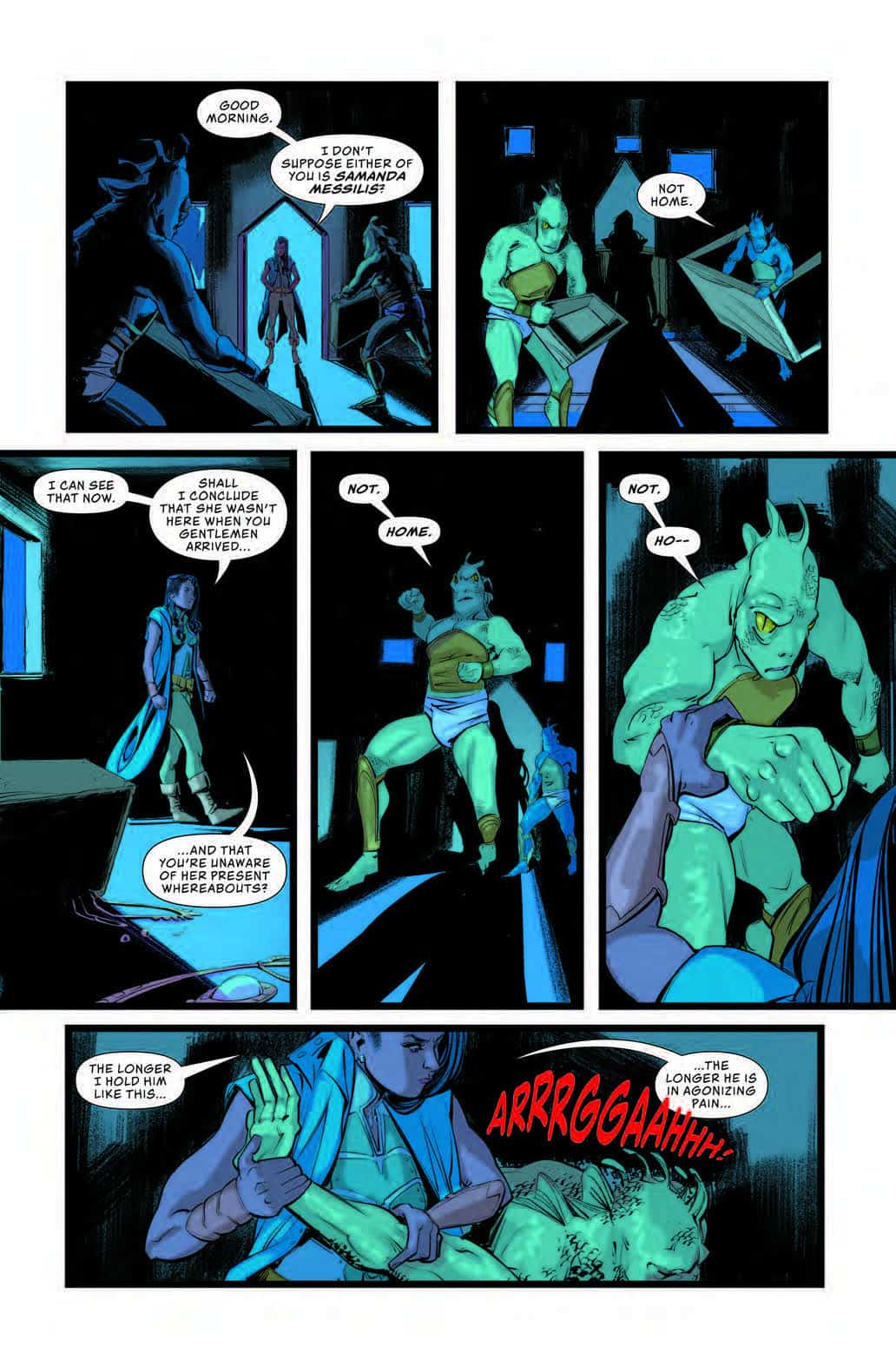 CV: Who or what are some of your creative influences?

BS: So many, honestly. And for FAIRLADY I drew from pretty much everything that ever made me smile or think, or in some cases, both. MAGNUM, P.I. and THE ROCKFORD FILES, certainly. Bits of Tolkien, Moorcock, China Mieville. Films noir, like THE BIG SLEEP and KISS ME DEADLY. I re-read a lot of Warren Ellis, both for his storytelling and for his explorations of standalone comics. Brandon Graham’s run on PROPHET. Philippe Druillet. CONAN THE BARBARIAN –Howard’s stories, the comics, the ’82 film. M*A*S*H. Conversely, there was a lot of Orson Welles’ THE TRIAL and David Lynch in BLACK JACK KETCHUM.

CV: Are you working on any other projects you’d like to tell us about?

BS: I’ve two things that haven’t been announced yet, so I can’t say too much. One’s a quirky horror series with an artist I’ve known for years whose star is very much on the rise. I suspect it’ll be a bit of a big deal when it gets announced. The other is still in the early stages and won’t see the light of day until sometime next year. It’s a very different sort of fantasy series, completely unrelated to FAIRLADY. More on the sprawling epic end of the scale. And definitely very weird.

Thanks again to Brian! FAIRLADY #1 is available April 10, 2019 from Image Comics here!